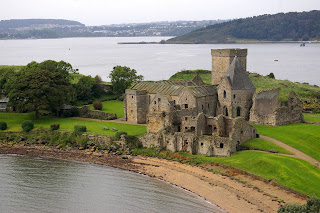 What an interesting day in history today was:

1296 - Battle of Dunbar: The Scots are defeated by Edward I of England.

1650 - The Battle of Carbisdale: A Royalist army under Montrose invades mainland Scotland from Orkney Island but is defeated by a Covenanter army.

1992 - Betty Boothroyd becomes the first woman to be elected Speaker of the British House of Commons in its 700-year history.


Oh, and in 1991 I married the lovely G in Inchcolm Abbey in the Firth Of Forth.

Happy Anniversary to you both. Isn't it wonderful to share your life with someone you love?
Kat (and Glen my Sweet Hubby)

Congratulations to you both! What a stunning location.

It is a beautiful place and was local to where we stayed at the time. it was part of the lovely G's kirk parish.

And aye Kat, it is grand to truly love someone.

Gaun ya big auld sentimental puddin' !
Although I suppose ye are almost only "just married !"
Wait 'til you've got the next 19 under yer belt !
Until that happy day aw ra best to ye baith but mind, nae kissin' unless yon man 'flu is aw gone awa!
Scudder

I need all the brownie points I can get!

Quite an auspicious day all round! What a wonderful place to be married. Congratulations on your anniversary.
When I read the bit about apartheid it reminded me of something I read today: "The only thing that should be separated by colour is the laundry." (or something to that effect)

I quite agree with that

What a great day in history, especially your history. Marriage is a wonderful institution. I love it so much I've got married twice! (Bless 'em both!)