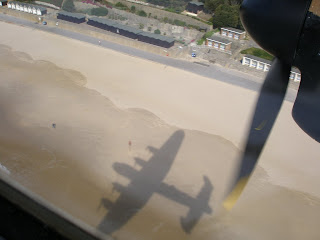 The whole squadron was intrigued by being ordered up on 13th April to practice low level flying and map-reading skills.

No crew needed second bidding to comply, and great fun ensued belting around  - sometimes at the official height of 400 feet - but frequently very much lower. Some crews reportedly even flying under power lines.

Dad recalled being terrified flying over lakes at full pelt having become more and more anxious as the Lanc got ever lower and lower, seeing the world streaming past his eyes at breakneck speed from the rear turret until his nerves made him snap at the pilot over the intercom that,

"if  you go any bloody lower I'll  have my bloody feet in the bloody water!"

He had of course already survived one crash landing and endured a painful spell in hospital recovering from injuries. { and when he told the story he didn't use the word bloody!}

Despite some speculation over the purpose of this practice, no official announcement or explanation was forthcoming. The impact on those living and working in the countryside in those areas must have been tremendous however. They wouldn't have experienced such levels of zero feet flying before and must have thought the RAF had gone mad!

The reason for the very low level flying would become apparent very shortly.
at April 14, 2010

that is a cool picture... kinda what i try to take along the beach!...