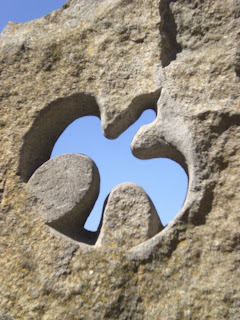 Kat, who writes a blog I follow, tagged me with one of these odd challenges that seem to reverberate around the bloggosphere.  It was to go into my photo folders open up the first folder,  publish the tenth photo from the folder regardless of what it is and give a wee explanation of what the photo is all about,  and then nominate 5 more folk to do the same.  In effect, a chain letter/email. I can't stand those 'if you don't do this something really bad will happen to a loved one' kind of nonsense so they all go into the bin - even if this isn't that kind of  rubbish, being simply the sharing of random potentially entertaining, or interesting, information.

Not sure if I want to get into lots of these -  though I did post one of my own about favourite films a while back in a moment of weakness  - I was none the less intrigued to go and see what the photo would be. It turned out that it was of my Lovely G, who has asked me to make sure that there aren't any photos of her posted on the blog, so that ended the search and I just put it out of my mind.

Now, I don't know if,  like me,  things sometimes tick over in the back of your brain in an unwanted kind of way, but this stuck with me and, as I sometimes find variations on a theme {old musician, see} interesting,  I found myself idly checking out what the first photo of my tenth folder would be and lo and behold this wee thingy popped up.  It's appeared on the blog before in a post that was just photos a while back as it's one of those photo's which are in some ways important to you.


Taken while on holiday in The Langued'oc, France, summer 2007 in a lovely wee village called Minerve - think minervois wine and you'll be spot on even though it was originally named for the Roman god Minerve.  It's of the Cathar memorial, commemorating the execution of 140 men and women here in 1210 during the Albigensian Crusade, the only crusade to take place against fellow Christians. The Cathars had a simple if unorthodox view of Christ but most importantly denied the supremacy of the Pope and the need for Bishops and priests to intercede between man and God. They also held women as equals in the church. For these beliefs they were suppressed in the cruelest ways and much blood was spilt. The Cathars thrived in an enlightened environment prevailing in the Languedoc of the time, when poetry and the arts, education and scientific enquiry, along with protected freedom and tolerance for other religions was coming to the fore, and of course much of this was lost as a direct result of the crusade. It's an area of France, a story and a time in history that's fascinated me for many years.

In 1982 the massacre of the Cathars here was commemorated by the sculptor Jean-Luc Severac, who created this stone pierced through with the shape of a dove, symbol of peace, because ' the Cathars raised themselves above the material world.....so I made the dove, not out of stone, but out of light - the absence of matter is the only way to represent the Cathars.'

The memorial is simply inscribed 'Als Catars 1210' - 'To the Cathars, 1210' in Occitan, the language of the languedoc {which itself means "the language of yes" in Occitan} and is very moving in it's simplicity and it's message.

Rather than single out just five fellow bloggers to ask to develop the theme, if anyone would like to take up the theme of tag my tenth photo please do and let me know. Five blogs I know who often include interesting photos are below and I'd love to see what dropped out for the theme, but please feel free to ignore if this isn't your thing { and sorry to ask too, if this doesn't fit with your blog}.

Thanks for including me, Al. I love your picture, what a lovely memorial. I've put mine up...I'm off to speak to a man about a horse (as my dad would say), take care!

I, too, am gutted (although, as you can see, I can punctuate correctly, unlike my brother whose blog you did nominate). If you decide to invite a second tranche, I would be delighted to participate...

Scudder has posted a photo explaining thet he has NOT been tagged - is he just a poor loser? HA - but I did say that everyone should take part, so stop whingeing the lot of you and get posting. Then nominate 5 others - then you'll see how easy it is not to upset folk!

Seriously - I actually really liked this as an idea and a way for getting to know a bit about some of the folk that communicate through the blogosphere, so why not give it a go.

By the way Scottish Nature Boy, I am in awe of anyone in command of correct pronunciation. It's something I've always struggled with.

So you're officially my hero!!

Good idea Al, I'm joing in, and by coincidence it's yet another Scottish picture. I might as well become an immigrant as I go north of the border so often!