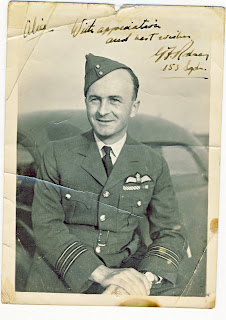 Continuing the story of my late Dad's Lancaster Squadron From Jan 45 to the end of hostilities in May. For info, the story starts here


For 153 Sqn at Scampton, April 9th saw the arrival of Wing Commander Guy F Rodney, DFC, AFC to take over command of the squadron as replacement after the tragic loss of Wing-Co Powley. He had already completed two operational tours on bombers. Like his predecessor, he was a Canadian holding a regular commission in the RAF. One of his first tasks was to conduct a briefing of 17 crews (8 flying on their first operation) for an attack on Kiel that same night.

Kiel naval base faced the Baltic Sea. It housed three major shipyards as well as the Deutsche-Werk U- boat construction complex. With deep-water channels and easy access to the North Sea via the Kiel canal, it represented the last bastion of German naval power. Conditions favoured the attackers - clear visibility enabled positive identification of both the primary and secondary target areas, enabling crews to carry out the Master Bomber's orders efficiently and accurately. The major targets were extensively damaged, as were the battle cruisers 'Emden' and 'Admiral Hipper' - their sister ship 'Admiral Scheer' was hit and capsized. The Luftwaffe created a celestial 'flarepath' (a system of marking with aerial flares, either side of the approaching bomber stream, to enable fighters lurking in the darkness outside the flarepath to swoop in to mount beam attacks against any bomber silhouetted by the opposite line of flares - and to be gone again before the Air Gunners could pick them up). Fortunately, no back-up fighters appeared. 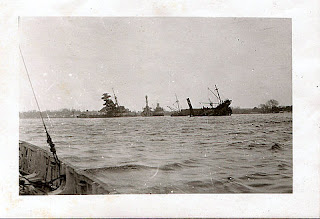 On April 10th, the target selected was the town of Plauen, which lay to the southwest of Zwickau, about 20 miles from the Czechoslovakian border. Although not code-named as such, it could well have formed part of the "Operation Thunderclap" Russian offensive support programme, since the primary target was the rail marshalling yard. With the advancing Russians still 100 miles away, the squadron contributed 15 aircraft,who despite some haze blurring the T/Is over the target, were able to make a concentrated and accurate attack-aptly described by bomb aimer F/Sgt Norman Fenerty, flying in RA 582 (P4-2ndL) piloted by fellow Canadian F/O Vernon Martin, as a "good prang" - Yes, they really did use language like that!

Plauen is home to two unique architectural features; the 2nd largest brick built bridge in the world and the Friedensbrücke - largest stone arch bridge in the world. As far as I can find, neither of these structure were significantly damaged in the raid. 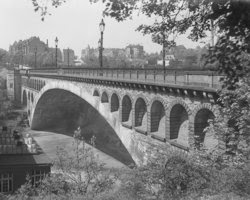