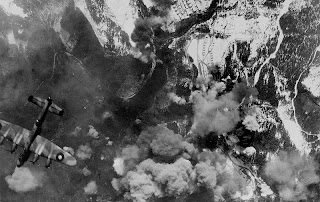 On the 25th April (the day that the Russian and American armies met on the River Elbe) at the distinctly unsociable hour of 2.30 am, 153 Sqn crews were briefed to attack  Hitler's personal Alpine hideout, 'The Berghof ' including the nearby "Eagles Nest" -  both  houses located in a mountain complex at Berchtesgarden in southern Germany. The object was two-fold; to serve notice to the so-called 'Werewolf' movement that they would be ill-advised to try and create a southern stronghold dedicated to further resistance; and hopefully to catch the elusive Fuhrer at home. The news that the target had potential to be Hitler and some of his key party henchmen raised much determination and excitement. Finally the crews had a target with a face.

This time, it was personal.

Berchtesgaden is located in the German Bavarian Alps, in the south district of Berchtesgadener Land in Bavaria, near the border with Austria, some 30 km south of Salzburg and 180 km southeast of Munich. The area of Obersalzberg had been purchased by the Nazis in the 1920s for their senior leaders to enjoy. Hitler's mountain residence complex, known as the 'Berghof', included a small mountain top retreat called the 'Eagles Nest'  and was located near the picturesque and remote town of Berchtesgaden. The town and its environs (Stanggass) were fitted with the required facilities to serve as an outpost of the German Reichskanzlei office (Imperial Chancellery). It was this and the presence in the area of significant numbers of SS troops usually involved in protecting the Fuhrer which sealed the towns fate as a strategic objective.

The 153 squadron  contribution to the attack was led by W/Co Rodney (who had to abort the mission, due to S/I engine failure on LM 550(P4-C) - but unknown to him (and most others) he was well represented by his Squadron Gunnery, Navigation and Bombing Leaders, who quite unofficially, smuggled themselves aboard ME 485(P4-3rdD), piloted by F/O Don Freeborn, before take-off.

In the event, apart from its propaganda value, the attack was inconclusive. Poor weather conditions over the Alps, {allied to recent snowfalls which distorted identification of landmarks},inoperative ground fix radar - due to the mountainous terrain, and confusion caused when the gaggle leader failed to turn at the correct point, all resulted in aircraft bombing on diverse headings. Some of the nearby SS barracks were levelled, but the primary target, although hit, was not fully destroyed. Unknown to those flying overhead that day, the Fuhrer was not at home when the boys of 153 and other squadrons called. Isolated in his command bunker in Berlin, he would commit suicide on 1st May 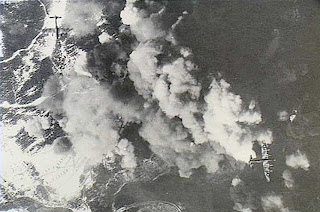 At least two bombs struck the Berghof villa itself. On 4 May, four days after Hitler's suicide in Berlin, departing SS troops set fire to the rest of the house. Only hours later, the U.S. 3rd Infantry Division arrived at Berchtesgaden along with the French 2nd Armoured Division. The Americans reportedly muddled Berchtesgaden with the Berghof and a French Army captain along with his driver were the first Allied personnel to reach the still-smoldering chalet. A French tank crew soon joined them. Over the next few days the house was comprehensively looted and stripped, apparently by Allied soldiers, although it would appear inconceivable that the retreating SS did not take advantage of the opportunity. The American 1st Battalion of the 506th A regiment (led by Company C) arrived four days later, on 8 May. The 3rd battalion of the 506th came into Berchtesgaden by a different route and sustained casualties in a skirmish with the crews of two German 88 mm guns still in place protecting the area.

One of the most notable artifacts taken by American soldiers was Hitler's Globe.

The main  shell of Hitler's Berghof residence survived until 1952 when the Bavarian government blew it up, fearing the ruin was becoming a neo-Nazi shrine and sight-seeing attraction. The Fuhrer's garage remained until 1995. The ruins were further obliterated by official action during the 1990s and early 2000s. By 2007 trees had overgrown the site and only scattered rubble and the top of a retaining wall were visible.

One of Hitlers favourite haunts, the Berghof  'teahouse' on nearby Mooslahnerkopf hill was unscathed in the April 1945 bombing raid and remained completely untouched.  By 1951 the house-sized building had been knocked down by the Bavarian government because of its close link with Hitler. For 55 years the more or less recognizable tea-house ruins (along with mostly intact basement rooms below) lay in the woods by the 13th hole of the post war Gutshof (Manor Farm) golf course. These were taken away altogether during the late summer of 2006.

Although the 'Eagles Nest' site is on the same mountain as the Berghof, Hitler rarely visited the property. It has been suggested he only visited the Kehlsteinhaus {Eagles Nest} around 10 times, and most times for no more than 30 minutes. However he did receive the departing French ambassador to Germany André François-Poncet there on October 18, 1938. Perhaps because of the lack of close association with Hitler, the property was saved from demolition at the end of the war, although it has been reported to be a haunt of visiting sympathisers to the Nazi regime over the years.
'Eagles Nest' is currently used as a tea-house and restaurant. Hitler's small private study is now a store room. 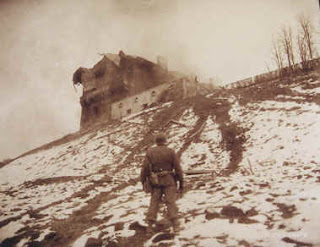 Although not appreciated at the time by the tired but elated crews who all returned safely to Scampton, Berchtesgarden would be the squadron's final offensive action of the war.  It had been in existence for only 7 months, during which 153 Squadron had despatched 1,057 sorties (and prepared for many more), dropped 4,654 tons of bombs and sown 204 sea-mines.