A Grave Concern Makes My Day. 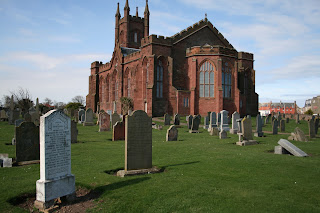 It's funny how you stumble across things sometimes. Yesterday I'd gone down to Dunbar with the camera doing a wee bit of research on a one time resident of the town {Perhaps more about that sometime later on the blog} My search for information took me to the parish Kirk, or more specifically, to the graveyard. It was a lovely afternoon, bright and sunny and with only a gentle breeze coming off the sea - the Kirk is at the edge of a steep slope down to the sea and has a great outlook over the water - and I spent a peaceful hour wandering the old graveyard looking and enjoying as I do, the old headstones and some of the beautiful scripts, lovely carvings and intriguing stories that you find in such places. Even though I didn't find my man and had to abandon the search due to other commitments, I took a few photos and generally had a braw time. It's just the kind of thing I like to do occasionally. I find old graveyards fascinating, with their final impressions of people long gone. Almost all life is there to see; the pious; the humble; the pompous and pretentious; the fading vestiges of life and of grief and the final outpouring of love and respect from those left behind. There are symbolic refences to belief in the carvings - of time passing, grim reapers and heavenly ascending souls. There are sometimes signs of professions in carvings of dress or tools or activity and we have all seen the images of knights or Lords laid out in armour, sword alongside and hands piously clasped .

Later at home, I looked at the few shots I'd taken and decided there was nothing there really worth holding onto. I decided to carry on with any research I could online for a bit to see if I could track down any sign of this mans last resting spot, although I did think it would be slim chance as he's not a particularly well known character in reality. One of those small stories in local or national history that pass by unnoticed but that seem worth recognising somehow.

In the course of hunting online I found what I thought was an online list of graves in East Lothian but actually turned out to be someones blog - a photographer who's fascination is with ancient graves, old Kirks, headstones and memorials across Scotland. Right from the first few photographs I was struck by the power of his art - and in his case it is art - in capturing the essence of what I described above. I found his work haunting in it's grasp of the subject and beautiful in it's expression. As you can tell I was captivated and spent the best part of an hour when I should have been doing something else meandering through his blog,  realising that here's someone who had not only a passion but real ability.

If you have a while - if you're like me you'll need more than a moment - here are links to his gravestone blog and to his other mainstream photoblog. High quality work from someone with a great eye.

I'm fair jealous. He probably does the dishes and phones his mother every week too.

Sounds like a great day you had Alistair! I too find graveyards to be fascintaing places, especially the older ones that are filled with so much history. Very peaceful too.

Nothing like a nice wander around a graveyard with an ice cream cone.

Some of the hidden stories can be awful depressing though. Like the ones in coastal and coal-mining Fife. Whole families devastated through sickness, sea-wreck and cave-ins.

Wandering round graveyards is something I picked up years back from an Aunt who loved doing just that and as we went on holiday with her and her husband every year I often went along with her, even if I found other things to do while she looked at the gravestones.

I know what you mean about some of the stories being depressing TSB but it's also fascinating how random things can be sometimes. I also love to see how widespread families could be - there are often references to people buried abroad in India, Canada or Australia and it makes you realise how common it is for families to have been separated even back two hundred years through military service or some other reason.

I'm also a sucker for some of the roadside markers and memorials you can find which often commemorating those kind of tragedies you speak of, but also some incredible bits of local history. It makes you realise just how limited 'mainstream education' is on things specific to local areas.

I loved this post, especially your line about gravestones being "final empressions of people long gone". That really struck me. Perhaps you could write a book about local history. You have the touch and it might fill in some of the holes in mainstream education you talk about. Or you could just keep blogging about it :)
I smiled all the way through Victor's duet with the great violinist. My son plays that piece, but not nearly so fast!

Rebecca - It's a great piece isn't it {the Czardas} and incredible the speed he plays it at isn't it? I'm glad you liked the video. I often wonder how many people are interested enough to actually listen to them but I like the additional bit of 'personal' contact they give in letting us share a moment more of experience together. Thanks for the kind words in your comment. It's fascinating how much history there is all around and how little of it gets into mainstream education. Very little specifically Scots history is taught in schools and almost nothing directly about the local area except for the youngest pupils in early education. Older kids are taught only things of national or world importance, taught to look out and away from their current place in the world. Maybe this is why we lose a local perspective on other aspects of life and have come to see community as much less local or important?

Like in most other things I feel there's an opportunity of balancing these things more appropriately if we would only stop to see the benefits and possibilities more clearly.