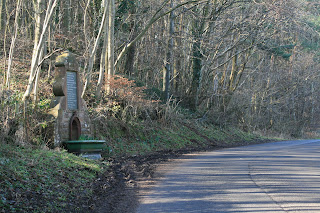 I was out with my camera yesterday and passed by this local spot which has always intrigued me. It's on the road out of Innerwick, a neighbouring village a few miles from home, and is situated at the roadside of a what is a very quiet minor road these days but in times past was what used to be a 'Drove Road' used as a route for driving animals to market. These Drove Roads are some of the most ancient pathways, used from the far distant past and were designed to allow movement of beasts with decent fodder and watering along the way. They also followed routes which gave as much protection as possible to both animals and men in what must have sometimes been dangerous times. This watering place is much more ancient than the sandstone water fountain that is there now and may have been a spring or a place where fieldwater conveniently gathered. 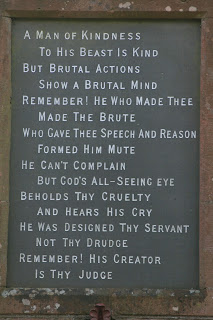 The Inscription
I've never seen one with an inscription like this before and it dates from the 1870's. It takes Victorian sentimentality and Scots God fearing and blends them well together in an appeal - or warning - to drovers to look after the animals in their care, as well as providing them with a place to stop and water them before carrying on with the journey to market. They must have been a hardy breed these travelers and their animals. Often highlanders would walk their famous black cattle down from the mountains - even the islands off the west coast - to markets and fairs many miles south in the lowlands or even down into England if they felt they could get a good price before turning and walking all the way back home. Cattle from the Isle of Skye were swam across the narrow strait to the mainland at Glenelg while their masters rowed across before they would be walked to the markets at Falkirk and Lanark or further afield. The journey could take weeks and involved avoiding raiders and gangs bent on extortion or robbery. Once the market town had been reached, a price agreed and paid, drovers would return home with their fee and the money belonging to the farmers before returning to their own crofts and families. 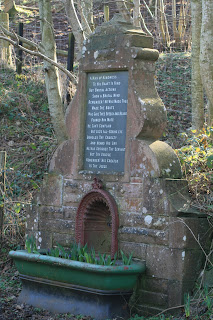 The taking of money payments to allow drovers and their charges past unscathed was an activity that thrived in the highlands and in the lands controlled by Border Reivers in the south and became known as blackmail from two Gaelic words blathaich pronounced (the th silent) bl-aich (to protect) and mal (tribute, payment).
See you later.
at March 03, 2011

The drove roads are a fascinating topic. We live near a network of them serving the celtic site at Gosbecks near where we live, now only visible as cropmarks. (See my blog of 10 January).
I went over the drove road from Glenelg last May, indeed the picture on my 27 January blog is on the route approaching Kinlochourn.
I have been over the Lairig Ghru in the cairngorms, and find it astonishing to think that animals could be persuaded to walk over there. I was expecting a clear, levelish path through there, not the boulder field that I found!
Down here, there's the old story of the turkeys that were walked from Norfolk to London. They would coat the birds feet with tar and dip them in sand, to protect their feet from the long walk.
Traces of earlier times are absolutely fascinating aren't they? Historical landscapes really excite me!

So much history just around the bend. For some reason that inscription reminds me of William Blake.

Nice post, pretty place, a bit of history, what more could
you ask for? Reminds me of old roadside shrines.
Kat

Peebles to St Marys Loch via Gypsie Glen & Kailzie Hill Drove road is a great walk/cycle on a summers day, a classic droving route with walls and water holes,
Al i have `The Drove Roads of Scotland` book if you want a read,

Hullo all. I guess we're lucky to be able to have such tangible reminders of the past all around us. I sometimes wonder how many incredible things we unknowingly pass because we don't recognise the signs left behind or the traces are too faint to see. It's easy to see the abandoned houses and castles of the rich and shameless of course while the more humble and less immediate is passed without recognition except by enthusiasts or academics. There are so many small markers and monuments even at the roadside which commemorate sometimes incredible events.

Like Swifty and CK commenting here on particular routes, walkers and cyclists who travel these highways of significant insignificance get an immediate feel for the lives of those who walked the road before.

I know St Mary's {Tibbie Shield's Inn and the memorial to James Hogg 'the Ettrick Shepherd'} quite well and also the area mentioned by Swifty and they are both spectacular in their own very different ways.

I wouldn't mind a look at that book CK. Perhaps you would like to borrow one of mine on the military roads of General Wade or the airfields of East Lothian in return?

dbs - it's a very grand sounding wee stanza for such a humble place isn't it. I don't recognise it though.

Having difficulty again getting a comment posted on your Blog Al ???
If this comes up twice you'll know why ?
I just commented that I'd quite like to do a wee photo shoot with you one of these days soon ,, (when I get some strength back ? )
Oh and that you'd just given us all another fine little interesting piece ,, Nice one

Hullo Scudder, hope you're well. Sorry to hear you had a problem posting. Happy for company anytime buddy. I wouldn't deem to call them a photo shoot though. I'm much more of a 'snapper' than a photographer so don't get your hopes too high. In all honesty its hard to take a bad photo here as it can be so spectacular locally. {and my lovely G did buy me a very nice camera which helps}

I really enjoy your history posts.
Shades of the cattle drives in B westerns!
Cattle are still moved to summer mountain pasture and back down to the ranches in the autumn in Wyoming--it was a sight to see, but not fun trying to drive a diesel pick-up through a herd that was taking up the road.

Glad you enjoy them. Ooh, cattle drives. Just hearing that gets me excited! Surely it must be every wee boys dream at some time to be a cowboy on a cattle drive...........

I remember some photo's of local cowboys you posted a while back when you were still in Wyoming and they seemed timeless.