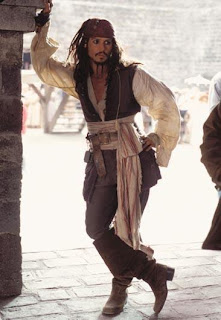 A Fictional Pirate.
{Other kinds of robbers may be available.}
Hullo ma wee blog,

I feel better after that rant about politicians and banking and all the rest of it. Its therapeutic to have a rant and get it all out when you're feeling a bit down and sorry for yourself like I have been for the last couple of days. I don't suppose it does much that's positive or encouraging for the readership of the blog - after all not many people {Scudder excepted} - will be wanting to hear me 'gurn' on about politics and there are plenty of 'oddities' out there on the internet when it comes to political ideologies and the like. It's not really what the blog is about and most of you read this stuff because you like the way I write and not necessarily because you like the way I whinge, but it's my gaff my rules I'm afraid so you have to put up with the occasional grumpy old man routine.

We've been getting rid of as much debt as possible recently. The redundancy insurance and bill payment protection gave us some really good leeway to eat into any debt we had and as a result we are in a much better position than we have been in many years. That having been said we are making plans for the future to try and protect ourselves ongoing. I would never have believed that I would still be unemployed after all this time and we have to face the reality that things are going to be tough for the foreseeable future. Our income will drop dramatically in a few months when the last insurance cover ends and we will be operating on about 30% of what was our joint income until I find some - any - employment. Its a very scary prospect and we are both worrying about it.

It's been quite an education just trying to get rid of debt. Clearly it's easier to get into than out of but, even when you have the money to hand,  it's not as simple as you would think. We have been closing down credit cards by contacting the companies and advising this is what we want to do and getting final values we should make as payments. Interestingly, even though we have paid several of these off lately we are still showing outstanding balances on accounts that should have been cleared. After all we contact you, you tell us what's to pay and we pay it. Job done you would think but, these companies can't seem to give you the right amount to pay so you're left owing a few pounds here and there. Often the companies won't take a payment for this over the phone, you have to make an electronic payment - with a credit card - or send a cheque which takes longer and low and behold - gets you a charge just to do that.

There are also a couple of accounts where inexplicably the payments we were told to make to clear have resulted in us being in credit. One company got it wrong by quite a bit . When we asked to have the money refunded we were told that it would take about three weeks to do.
We thought  " but this is the electronic age and you get the money direct from our accounts. You should be able to simply reverse the process and pay the money directly back where it came from....." But no, it's not that simple. How stupid of us. They have to raise a cheque - manually - then they have to send it by snail mail and that whole process will take three weeks before we get a cheque to put into our account which will in turn take three - and sometimes up to five - days to clear. {Isn't it funny how this is the case when there are ads all over the TV for quick loans that offer the cash in your account in just fifteen minutes?} We asked why there was no electronic system available and were told   "well, there is - for emergencies - but if you want us to do that there will be a charge of twenty five pounds."

"So, wait a minute you want to charge us twenty five quid to get back money that belongs to us and was overpaid because you gave us the wrong information in the first place?"

"But you agree that we paid what you asked us to pay, right?"

"So - isn't it right that you should pay the cost of what is after all your mistake?"

This went on backwards and forwards for several minutes until eventually we gave up. No-one at the bank could accept that it would be good customer service - and business sense - to just make the payment.

The end result is we will never ever use this bank again, under any circumstances.

Unsurprisingly,  yesterday it was announced that the chairman of this bank is receiving a salary of £2.1 million and this year will receive a bonus of over £5 million.

Well there were tears in there somewhere........

Email ThisBlogThis!Share to TwitterShare to FacebookShare to Pinterest
Labels: Banks. Thieves and Robbers, people who have no fathers

I reckon you'll feel good, simplifying your life that way. Get all this credit and payments nonsense off your back, and leave it all behind. It has certainly worked for us anyway.

I certainly hope so. It does feel better already with what's been achieved.

Got a new mortgage this week and with a new bank, last bank did me no favours, i was never rude to the staff as there just doing a job but glad to move on,now no debts (except house!) and a massive weight off the shoulders, next a big clear out of household stuff i dont use or need, a good clear out is good!,have a good weekend Al and will get that pint and a blether next week...

"I don't suppose it does much that's positive or encouraging for the readership of the blog" - WRONG!! Reading your rant was such a positive thing for me Alistair because it totally summed up how I feel about the way things are going in our country at the moment. It was good to see it expressed so succinctly and I thank you for it.

My daughter is at Uni at the moment and is working towards a possible future in investment banking. You can imagine our initial reaction! However, after looking in to it with her and now realising that not every job in every bank involves screwing Joe Bloggs to the hilt, we're more supportive. Hopefully she'll work her way up quickly and sort the whole thing out! Ah, we can but dream...

dbs - that company policy stuff often doesn't wash with me - people can always find ways through that if they want to - but this girl and her boss just used it to hide behind. Sticking to the letter and not the spirit of the rules just shows them as small minded jobs worth's as far as I'm concerned.

Jane - hanks for that encouragement. As far as banking goes its overwhelmingly not the people but the system that's at fault. Even the rant prone I knows some nice people in the finaince industry - heck I even married one of them.....