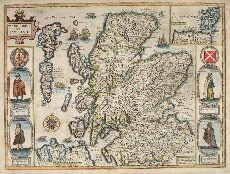 I have been thinking these past few days, as I take my lovely G to the railway station in Dunbar for her morning train to Edinburgh and her working day, about what topic I should choose for a post here. I got some really nice comments about my post on 'The Black Watch', which was one of the most enjoyable posts to do, due to my real attachment to the story, although my writing of it caused me to go back to books not read for some time and find some mistakes that maybe I should clear up a wee bit. {I also found an absolutely heart wrenching account of the three mens last hours and their execution which I should maybe also look at for the future} But I have been trying to think about what should come next.

I have an almost equal feeling for the men of the 78th Seaforth Highlanders who mutinied at Edinburgh Castle in September 1778 and their story is another that would be well worth the telling as it in many ways resonates so closely with the 43rd. But in reality I'm spoiled for choice.

There is so much in the story of this country that we are never taught about at school - I think that was one of the main drivers in my interest after I left, and maybe my lack of interest in history while at school - I didn't see the relevance to me as a wee Scots boy in school learning about the English civil war or the royal family. It was as remote and dry to me as the ancient Egyptian or Greek stuff they tried to get us enthusiastic about. Then again school was often baffling for me. I couldn't understand why you could get praised - a prize even - for reciting a Burns poem in 'braid Scots' on one day and be told off for not speaking properly in class the next! So this morning as I drove back home from Dunbar I was in a dwam*. 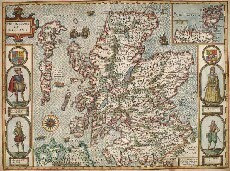 I left Dunbar and its castle and harbour behind, with all the potential tales of Mary, Bothwell and Darnley, of 'Black Agnes' and the siege of 1338, of English fleets unloading men and equipment for the invasions of Scotland from times long gone, drove past the memorial to the 'essential agony' of the battle of Dunbar to join the A1 and to turn at the foot of Doon Hill and its spectacular but windswept viewpoint over the town and the sea, where English and Scots armies had stood and considered each other in 1296 and again in 1650 when Leslie and Cromwell had so disastrously clashed. I thought of the Scottish equivalent of the 'trail of tears' that had followed that last particular bloody episode. That too would be a tale so worth telling. Even most Scots know absolutely nothing of that. I couldn't make up my mind. 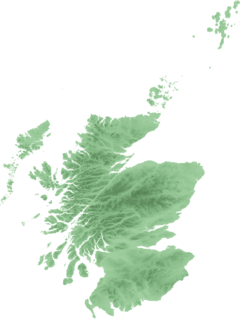 And so I turned my thoughts to the weekend and a family gathering with my lovely G's brother and partner but that took me mentally on a drive to the Kingdom of Fife across the battlefield of Prestonpans and the false hopes of the Jacobites after that easy win, or the tale of Colonel Gardiner as I pass the front of his mansion of Bankton House. Edinburgh of course is as stuffed with stories as it is with tourists in summer time, and the road would take me past the battles of Pinkie and Carberry and on to the Forth bridge past South Queensferry and Stevensons tale of David Balfour and Kidnapped. Aye and that takes me to Ballachuilish and Appin and the murderous tale of the 'Red Fox', of 'James of the Glen' and that sad memorial at the side of the bridge, so poorly signposted that almost everyone drives past completely unaware. And what of Glencoe and the massacre. Maybe not, everyone knows about that. Oh but if I'm thinking about the Forth Bridge, what about the Tay Bridge disaster? Thats a cracking wee story that one. Or wait, maybe I should go west, back home to Ayrshire and Robert Bruce, Louden Hill, or Glentrool and the English, Or Largs and the vikings or.............

See what I mean. In the course of a couple of hours I've gone fae a dwam tae a fankle*. If only I could sit with you, maybe over a pint or a wee dram, I could tell you one or two of my versions of those wee stories. You could pick and choose even. That would be much easier than me having to type it wouldn't it. Actually maybe I should sit and talk through some of those stories. Maybe that would help sort them out in my head a bit. Ach, I'm sure it will sort itself out in time and at least I'm never going to be short of a post or two if there is nothing else exciting happening in my life at the time.

So what will be next?

Listening to Soundtrack to the movie 'The Insider'
at October 30, 2009

Email ThisBlogThis!Share to TwitterShare to FacebookShare to Pinterest
Labels: history

Al: Before I get lost in a wallow of my own words, let me say emphatically that I would love to read more of your postings re people and places which have a historical significance. School gives us the broad view and some practice in memorizing names and dates. Unless one goes on to specialize in a particular bit of the subject or has an interest sparked by one's own family history, we miss out on some very fascinating people and incidents which get lost in the grand scheme.
I do appreciate that its not as easy as simply deciding to do a "post" or an essay on a particular battle, group of people, time in history. I have several such posts rumbling about in my head and haven't had time or creative energy to work them out.
I'm familiar in a very general sense with most of the names you cited above, but only because I became interested in Scottish legend and lore. As I was then in my teens, I think it was a distorted and romantic kind of interest. [I actually hoped my Scots kin might have been Jacobites and supported Bonnie Charlie!]
My nephew teaches high school history in my home area--he draws his students in by challenging them to find out where their own family may have been during WWI--or did any of them go "west" during the big push to settle out here--. He plays them the music of an era they are studying--that sort of thing.
Bring it on, in whatever order it occurs to you--your loyal fans will be waiting.

Hi Alastair, more fascinating writings from you, and I love that map! The history of the Royal Family didn't appeal to me at school either. Have you read that recent history book by John O'Farrell "An utterly impartial history of Britain, or 2000 years of upper class idiots in charge"? I think most of us at the bottom of society's heap suffered from those above us, Scots or English! I've been reading lots about Culloden, what with the opening of the new interpretation centre (though I haven't actually visited yet). The issues are so complex, and don't fit in very well with the simple romantic stories demanded by Hollywood. So much for me to learn.

Thanks for the comments.

MM I think its a given for me to write on some of the bits of Scottish history I find interesing again shortly. I really enjoyed doing it, and to do that and get such an enthusiastic response is lovely.

Swifty. No Haven't read that one but the title appeals to my socialist side. I have a library - well a room I call my library -full of my history and architecture books and my collection of old Scottish maps. I have an original 1660 John Speed among them and would one day love to hang the 1610 version beside it, but its very rare these days and frighteningly expensive. But I love my maps and the stories they tell if you just spend a wee bit of time with them.

I know Culloden and the history around it quite well - my clan, {Robertson or Donnachie in the Gaelic} like many others, fought on both sides. I have been a couple of times and its a bleak but still impressive place. Worth a visit some time you are up.

Well, I'm intrigued by Black Agnes, personally! Was she anything to do with the Black Douglases (or the Red ones, come to that?)and mention of the Leslies reminded me of the Balquihain Leslies of Fetternear (where I did my dig up in Aberdeen). I love Scottish history, though I but a feeble gist of it. I'm better with Scottish prehistory by far.

I apparently have some much-diluted Scottish lowland blood (the Cranstons, of that ilk)though I have yet to find where they fit in, bar my Knapman ancestors living in the village where Lord Cransto(u)n had the Big House - methinks there may have been a misalliance . . .

I agree with you about the appropriate histories being taught - lip-service to the mainframe of history, the Big Picture, but then concentrating on English/Welsh/Scottish/Irish timelines as so more appropriate.

If it's any consolation, once past Bonny Prince Charlie, English history became a conglomerate of Turnip Townsend, the Spinning Jenny, the 3-crop rotation system, Stevenson's Rocket and the Shaftesbury Reform Bill, all of it regurgitated in a most unedifying and boring fashion . . .

I always said, I only started really LEARNING once I left school, and then I could choose what I wanted to learn about.

The 'Black Agnes' above was the doyen of Dunbar Castle in the siege of 1338 and held the castle against the English in her husbands absence so not the connnection you are perhaps thinking of.

Alexander leslie who fought Cromwell at Dunbar in 1650 was one of the most fascinating characters of Scottish and even British and European history of the time.

As for much diluted Scottish blood - I think most of us are mongrels really - I'm Scots,{Robertson} Welsh, {Hughes} Irish {Farrel}and Australian { a returning Hughes} and that allows me conveniently to pick and choose whatever I element I want to stress in justifying the point I am trying to make at the time I guess. But I suppose being born here and given a monicker like Alistair { Gaelic for Alexander} Robertson I can only truly be Scots which is only fair as its both my strongest heritage and my nature.