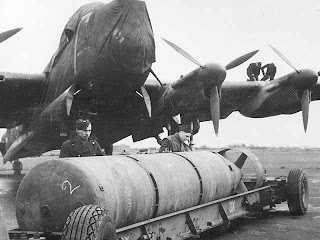 Leaving Scampton at 1730 to join aircaft from other Squadrons at the bomber stream concentration point Sudbrooke, 16 aircraft were sent to attack the Braunkohle-Benzin synthetic oil plant at Zeitz (about 30 miles south-west of Leipzig) on the 16th. For once, the weather was clear. Good ground-marking by PFF assisted an accurate and concentrated attack, hindered only by moderate flak and slight fighter activity. During this raid, F/O Clyde Byers RCAF whilst flying in PB 872(P4-2ndX) was posted missing, together with his four Canadian and two RAF fellow crew members, lost without trace. all are commemorated on the Runnymede Memorial. F/O C.W.Byers RCAF KIA Sgt J.B.M.Kelleher KIA F/S E.C.McLeneghan KIA F/s F.C.Irving RCAF KIA WO1 R.K.Crow RCAF KIA F/S R.C.Shilliday RCAF KIA F/S M.Frank RCAF KIA


Getting an aircraft into position to do its job entailed not only the flight crew but a team of skilled and dedicated people behind the scenes on the ground at base who ensured that the aircraft was in fit condition. These 'Erks', as engineers were called and Armourers were just as important as the flight crew in delivering the job and getting the aircraft and crew back safely and they cut no corners in ensuring that 'their boys' were looked after.

After each op the ground crew would go over the aircraft in detail and assess and repair minor damage and check that all the electrical and mechanical systems were in good working order. Compared to modern machines these were very basic aircraft and extreme cold and wet from rainy conditions could play havoc with wiring and electrical systems for radar, communication and navigation, each of them vital for safe operations. Aircraft would be withdrawn from service to deal with any major damage and of course there was the routine mechanical maintenance needed to keep operational in these times of heavy use. Groundcrew would have a very clear and graphic picture of what the Lanc and crew had gone through written large on the body and internals of the plane. The average lifespan of a Lancaster was 13 ops efore it was lost or so badly damaged that it required to be withdrawn from service and broken up for spares. A few machines made very many ops of course but 'centurians', survivors of over a hundred missions were treasured icons of skill and good fortune in the squadron.

Groundcrew would be keen to speak to flight crew as soon as possible and get reports of any malfunctions or concerns of the crew so these could be rectified as soon as possible. Everyone understood how important it was for crew to have confidence in the aircraft at all times. Armourers would remove guns after each raid and strip down and clean the internals for safe operation as well as check the bomb loading gear.

Once the Lanc was passed as fit for next use - as little as a few hours at times - the ground crew could rest until flight crew were ready to take the bird up for a pre op check before the next mission. Once again feedback on any issues from this flight would result in frantic activity to have the issue dealt with in the 3 hour window before ops began. A tense time for all. The aircraft guns needed loading and aircraft would also have to be bombed up with the required number and type of bombs required for that particular mission. Some of the large bombs would take 45 minutes each to be safely fitted into the aircraft. All of these groundcrew operations of course took place at all times of day or night and in sometimes poor weather.

Confidence in ground crew was an essential part of confidence on the part of flight crew and over time naturally each would come to know the other. It was very normal for ground crew to be at dispersal watching their crew leave on missions, watch their bird lift off and head away over the countryside, red and green navigation lights fading into the distance and many groundcrew found themselves keyed up for the duration of ops and back outside at scheduled return time with ears straining for the first sounds of Merlin engines in the distance, enduring a sometimes long and sometimes fruitless wait for returning comrades.

Due to hostile weather conditions in Uk and Europe only 2 more attacks would be launched in January, the 22nd and 28th.
at January 16, 2010

hi. i'm really hoping this will work. i am a descendant of F/Sgt Michael Frank RCAF. i am his great great nephew. i am looking for contact information for the rest of the crews next of kin. early this morning i was contacted by a man from germany who believes he has found the crash site of my great uncles crew. it is of the utmost importance i find them. to give them closure and to bring our families home. my Email is as follows Lmpost5(at)hotmail(dot)com. todays date is the 16th of january 2021

Have you been in touch with 153 Squadron association. You can find it through google and there is a contact page. They also have a Facebook Group.

There may be information on relatives through any associations in Canada too?

Good luck with your search.
Alistair.