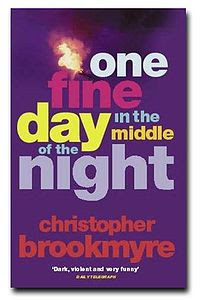 Of course it's not unusual for me to be awake at 4.00am. It is unusual for me to be quite happy and relaxed about it though, like I was today. Rarely for me I had gone to bed at 11.30 and slept right through till 4.00. So there I was refreshed and ready for the day but needing to be quiet for another few hours so that the lovely G got the sleep she needed.

Having put on the heating and hot water {the lovely G prefers not to rely on timers but perversely gets up to switch the boiler on manually. She loves being able to go back to bed for another hour, but also likes to be told sometimes that she doesn't need to come down as I will deal with it for her} and with coffee in hand I retired to the library and a comfy chair by the window so I would see the first lightening of the night into day. I had taken with me my current read; Bill Brysons 'Made in America' which I am enjoying immensely even though its just begun. I've read several of his books and he seems like a familiar voice to me now.

I've not often sat in the library this winter so far. Usually it's been too cold to be in there in the mornings and anyway, my usual haunt is the kitchen table where its warmer and a bit more distant in case of any noise disturbing the notoriously light sleeping G. It's rare that I can sneak out of the bedroom at any time of the night without a sleepy "love you" or "coffee again?" before I even get my hand on the squeaky door knob. {Aye, I know. I should do something about that. Quit nagging me will you!} Today though, it's quite balmy for a change even though it's been windy most of the night. The temperature, though the heating hasn't had a chance to make a difference, is fine and although I took a fleece with me I don't need it.

My favourite chair is across the angle in the corner and sitting there the window is on my left, its wooden blind still smelling fresh and new. Beyond it the small bookcase holds mainly my paperbacks, some favourites but mostly cheap and tacky, holiday reads yet to be read or discarded. On top is a Christmas cactus belonging to my Grandmother, probably older than I am and valued beyond belief. Next is a cacqualon {ceramic fondue bowl} hand painted in Swizerland and filled with odds and ends - pens, tiny screwdriver, things I know I will need some day - and then a photo of Dad and crew under the Lancaster. Beyond that, almost the full width of the wall, are the pale gold varnished wooden louvre doors of the built-in double wardrobe that shows the library for the bedroom it used to be, framed either side by a map from my collection and on top by a long framed photograph of 153 Squadron taken in July 1945. Then at the corner opposite me, the door out to the hall and then the large brown leather sofa bed with yet more maps above, these ones showing Edinburgh, The Lothians and Fife changing slowly over the last two hundred and sixty years or so. The corner hides a carefully stacked and tastefully cloth covered pile of boxes from the lovely G's parents house containing thousands of her fathers photographs still waiting to be checked and divided between her and her brothers. Unable to face the size of the task when we moved here shortly after her dads death they have lain apparently forgotten but calling patiently and with quiet insistence to be dealt with ever since. The last wall holds the big bookcase. Solid, wooden, the strong shelves are crammed with my hardbacks, originally filled by subject: history, architecture, religious history, arcana, Scotland, England, France and the like. My system is now somewhat degraded due to overcrowding and that too needs to be dealt with some time, sooner than later, preferably.

Behind me in the corner are two favourite maps: a 1550 woodcut map of Switzerland made in Zurich and a huge map of Scotland made in France for the Dauphin, by his court cartographer in 1690, reflecting the status and hopes of the Jacobites, newly arrived at court and probably at the height of their importance, influence and expectation of restoration to the British crown.

Then there's me baukit* in the corner

The coffee is hot and strong to the taste, just the thing for a first cup. Smiling, comfortable, I pick up my book and begin to read........

listening to Debussy 'The Girl with the Flaxen Hair'

*baukit - comfortably settled/Not likely to move anywhere soon. {The Minister came in and got baukit by the fire.}
at January 27, 2010

You really do have a way with words, I can see it all and it makes me smile. Glad to see you warm and comfy. Thanks for the tour, I feel refreshed.
Kat

You really do have a way with words. I can see everything as you describe it. Sounds quite pleasent. Thanks for inviting us in.
Kat

Lovely portrait of a scottish sitting room. How Ivor Cutler of you! Such fun to picture your room and life there. Cheers, Andrew

Aye - so clever with words and description that I forget to mention anywhere that the carpet if a pale pastel green, very muted, the walls are plain cream and the curtains at the window are dark green velvet on a pale wooden pole.

thanks for your comments guys.