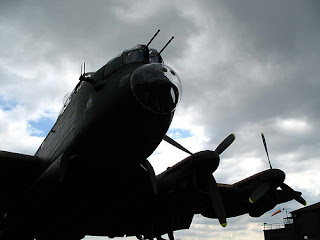 
2nd JANUARY,
18 aircraft departed Scampton mid-afternoon to attack Nuremburg. Once again, the 'Met' report correctly forecast clear skies over the target, enabling a very concentrated and highly effective raid. The severe damage caused to the important MAN and Siemens factories, together with many other industries and rail facilities, provided a near-perfect example of major area bombing. This area,which had been targetted regularly before with previously disappointing results for Bomber Command was finally destroyed.

Sadly, soon after take off, a fatal collision between PB 515 (P4-N) and NG 421(IQ-M of 150 Squadron) over Sudbrooke, Lincs resulted in the loss of both aircraft. F/O Dan Reid died with three fellow Canadians, his American Air Bomber and two RAF crew - all aged 22 or less.


4th JANUARY,
18 aircraft were dispatched to Royan - a small town on the north bank of the Gironde estuary, roughly halfway down the Atlantic coast of France - where the German garrison was still holding out. With clear skies and only light flak to contend with, the Master Bomber ordered crews to bomb from 9,000 feet, resulting in a most concentrated and devastating attack, delivered an hour or so before daybreak. This was the only time that the squadron bombed a French target. (Regrettably, after the war ended, it was learned that the many French civilians killed were not the collaborators specified in the Intelligence briefing supplied by Free French Forces sources; nor, apparently, did many Germans die as a result of the raid.)

Despite the severe wintry conditions, the Russian armies sustained their advances on the eastern front. The Western allies decided to lend them support in a series of raids aimed at breaking civilian morale, with major disruption of military and civil administrative and communication networks, plus railheads serving the Russian Front, by mounting attacks on the conurbation's of Berlin, Chemnitz, Dresden, Leipzig and similar distant targets. Codenamed "Operation Thunderclap" this entailed flights of long duration, in winter, mainly over enemy defended territory. The only factor in the bomber's favour was the long hours of darkness - without which the operation would have been impossible.

In all, three "Thunderclap" raids were mounted in January. In the first, Munich was attacked on the 7th. 17 aircraft were dispatched, but two (PD 378(P4-L) and PB 787(P4-Q)) had to abort. The remainder encountered dense cloud up to 20,000 feet and had to bomb on sky markers with all its hazards. Although results were declared inconclusive, this was the last major attack of the war on Munich city.

Flying in the 1940's was a precarious pursuit. Many pilots and crewmen were killed during training. Those that reached an operational squadron had not only to contend with the weather (whatever its moods), but with all the devices that a brave, innovative and stubborn enemy threw up against them. Such was the danger involved, that the chances of surviving a tour of 30 operations were not good. However, it was tacitly felt that your crew would be the one to complete a tour, it was the other unfortunates who would not. This may have been illogical, but had to be fervently believed, otherwise confidence would be lost and morale would suffer. The fact that a crew failed to return from a mission was shrugged off by their fellow aircrew by stating that "they had gone for a Burton". After all, they could have landed elsewhere, or parachuted into allied or enemy hands, and were simply unable to make contact with the Squadron. But most operational aircrew quickly adopted a fatalistic attitude, accepting that "if you get the chop, you get the chop - pray only that it be quick".

It was generally conceded that there were two periods during any crew`s operational tour which were more 'accident-prone' than any other. These were the first five and the last five sorties. The initial period required newly trained but battle inexperienced crews to rapidly adjust to the stern realities of aerial war, where, apart from possible hostile activity, a wary eye had also to be kept on 'friendly' aircraft who were similary trying to maintain their position in the main stream. Hitting another aircraft`s slipstream, in pitch darkness, was a mixed blessing, bringing consolation that you were not alone, combined with the fear of a collision. The downward thrust resulting from encountering slipstream frequently meant loss of height, which was not easily regained at higher altitudes. This was a fresh experience to newly joined crews.

The first and final five operations shared one aspect - that of tension. At the beginning was the fear of the unknown, the urge to prove oneself, and coming to grips with a novel situation. Once they had almost completed their tour, crews were conscious that the 'law of averages' was working against them; some even developed the 'operational twich'.

Of the twenty-two 7 man crews who would be lost by 153 Squadron, six (five on their first sortie) failed to reach five operations; seven were lost after recording twenty operations, but only two were on their last five.

Very interesting stuff. I've visited Munich 4 times and love the place. So much of the downtown is modern because it got the shit bombed out of it.

Lately, we also found a great map of Brunschweig circa 1954 in the trash and while casually looking at it I realized that the historic downtown was bereft of buildings and the roofless "exploded" view of many of the remaining buildings were just that, - they had been fire-bombed in a similar, yet less severe, fashion to Dresden. War is such a rotten thing. Paris is very luck to have been spared.

This is great!
My Grandad was a Navigator on Halifaxes at 102 Squadron. I have quite a few photos and stuff and was thinking of putting it down in a blog of some sort.Seeing this might be the kickstart I need.
Many thanks.