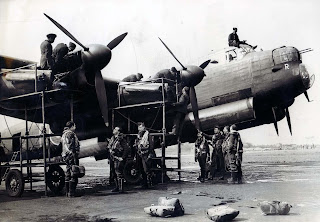 The following night after Dresden, 14th February, the squadron supplied 9 aircraft to join a raid of 797 aircraft on the city of Chemnitz, again deep in eastern Germany and not far from Dresden, which received its first major Bomber Command attack, but due to extensive cloud cover, allowing the use of sky-marking techniques only, bombing proved mainly scattered and ineffective with the bombs falling predominantly on open countryside. The group left Scampton at 2000hrs and included 5 crews who had returned from the Dresden raid only 13 hrs previously. These crews recorded some 19 hours operational flying in just 32 hours and must have been both physically and mentally exhausted to have spent so much time under the strain of combat conditions.

The Squadron suffered another loss when NN 803 (P4-2ndO) crashed over East Germany, whilst on its first operation - in fact, it had recorded only 64 hours of total flight time prior to take-off. The crew, on only their third operation, comprising F/Lt Clem Mills with 4 fellow Canadian and 2 RAFVR members were all killed.

Mines were placed in the harbour approaches. No combats were reported. A hang-up of one mine in PB 786 (P4-2ndQ) flown by F/O Bishop defied all attempts at release, so was taken back causing considerable alarm to the F/E (Jack Syme) who landed "with his fingers in his ears". Responsibility for disarming the rogue mine fell upon the resident Royal Naval Armament Supply Officer, whose posting to Scampton ensured expert technical oversight of all aspects of the mining activity. Landing with a bomb on board was not what the aircraft was designed to do and not something crews looked forward to as this generally meant that the bomb release had been activated and the rogue item could effectively drop at any time. Serious effort would have been made in flight to dislodge the misbehaving bomb to avoid this stressful and potentially lethal situation. To successfully complete a mission and return home in this dangerous condition must have been an additional torture on the crew knowing that the most dangerous time would be just when they should be reaching the safety of touchdown at home base.

Before take-off, crews were made aware that bad weather would lead to closure of Scampton, and that diversion orders could be expected. After an uneventful drop, such orders were issued and with one exception, crews landed where directed. In PA 168 (P4-G) radio reception was so poor that by mischance, W/Op Tom Jones misread the co-ordinates, causing his navigator, F/O Denis MacDonald to give pilot F/Lt Bill Langford a course to take them toward southern England. On re-checking his data, Tom saw and corrected his error; the course had accordingly to be amended towards an airfield set in a mountainous area of Scotland. After a considerable time, with fuel tanks menacingly low, they saw a circle of lights in the murk below. Prudently, Bill Langford used the emergency 'Darkie' channel, and after confirming that he could see the perimeter lights, was given permission to land. They found they were at Full Sutton, in Yorkshire - the home of 77 Squadron (Lancashire's Own), who were equipped with Halifaxes.

On eventual return to base, they found that the Effects Officer, had already impounded their belongings, but they were able to get them back.

Should a crew fail to return from operations, and no information was forthcoming that they had landed elsewhere, it became the immediate duty of the station "Effects Officer" first to list and then to impound their personal possessions, and to remove them into safe custody. Any individual who subsequently re-appeared could reclaim his possessions - otherwise, after reasonable time, they were transferred to the official RAF Effects Branch and eventually released to the man`s next of kin. The need for an Effects Officer, although prudent and necessary to avoid "affinching" or "liberation" of a missing colleague`s belongings, was inevitably likened to the approach of the grim reaper! Woe betide anyone who had loaned a missing man a book (or anything else) that did not bear evidence of his ownership. Frequent confrontations occurred, particulary in cases of shared accommodation; but once the Effects Officer impounded an item, it virtually became irrecoverable.

Tom Jones was duly disciplined by the Signal's Leader for "lack of diligence". Such was life on wartime RAF stations
at February 14, 2010

I wanted to let you know I am still reading these with considerable interest---just not much time to mull and comment.