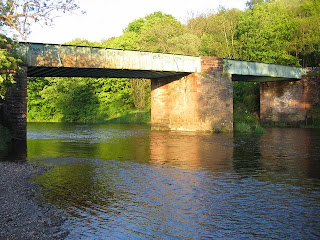 It's a year today since you died. I miss you so much, you old bugger! It really hurts sometimes you know? But I know I'm being selfish when I say that. I know that it was your time, you were desperately tired and there was no way back. I'm really glad you waited for us to be there. I was so far away when Mum died and that was hard to take. I'm glad too that Gordon changed his plans and got to the hospital and that he grabbed Adam and brought him with him. Although you were heavily sedated you were able to open an eye when Gordon said we were there and your breathing changed when I stroked your head. You could only stay a moment or two but I'll always hold them close. At the end it was all the Robertson boys together. I know you would have loved that.

You know, Gordon and I worried so much about you and Mum. You were so frail compared to her and we worried how we would cope with her blindness if anything happened to you. She seemed set to go on forever. You certainly threw us a flanker on that the pair of you. Then you broke your hip but were still determined to be independent. We knew you couldn't cope on your own and that's why there was usually one or other of us with you every day. We made a good team the three of us and we were still able to have a laugh even through the strain. It's brought Gordon and I even closer, which is great.

I was so relieved when we got you into sheltered housing - and still in the village. It was touch and go even though we never told you. Gordon fought so hard for you on so many things. He's so strong. I wish I was more like him. It gave you the best last 6 months I think. We couldn't accept the alternative which is why we pushed so hard. I know you loved your wee flat and the care you got there. I can't believe you set off the smoke alarm three times when you fell asleep with something on the stove and had the whole place evacuated with doctors, fire brigade and paramedics at the scene of your 'crime'. I definitely understood why you didn't tell us until the manager spoke to me. You looked so guilty once it was out. Like a wee boy caught in a fib. We had a row and then we laughed and I made you promise to stick to soup. I knew I would never get you to stop all together. I never told Gordon for weeks by the way and I made sure he had just had a good dinner and a pint {and was miles away} just in case.

G and I are glad we spent that last Christmas day with you. You were brilliant and made it unforgettable. She misses you as badly as I do I think. She hears you often and says it helps. I hear you sometimes, but not as often as I'd like. You come most when I'm in the car. It reminds me how we both love driving. I miss our chats. I miss the Ayrshire dialect the way we talked it. I still have it close. You made it sicca pairt o me.

My soups getting more like yours. G says I'm more like you now in lots of ways but somehow seems to imply that's not always a good thing.........you'll have to ask her about that yourself though.

I miss your advice. Miss the way you could break problems down and make them simpler. It's been so hard. I'm glad you weren't here to see me made redundant, especially the way it happened. You would have been frantic, especially the state I was in. I was so angry. I was in a mess for a while but things are a bit better and we are moving on. G and I are strong together and she's been incredible. I'm so lucky.

I try to keep a sense of humour going. You were able to laugh through some horrendous stuff over your last 18 months. That's my inspiration and I hope I can live up to it. You were always my hero but I could never tell you. I didn't really understand properly until after you were gone anyway. Bloody typical. I am glad that I was always able to tell you that I loved you. I'm glad I hugged you every time we met and and every time we parted. I can still feel your arms around me, still feel your stubble on my cheek. Still hear you say "see ya later, Ally Gator"

Email ThisBlogThis!Share to TwitterShare to FacebookShare to Pinterest
Labels: dad

Relationships are never simple, are they...? I miss my parents and sometimes wonder how I could have made the interaction more open between us. [But maybe I couldn't have done, the patterns are set early on.] I suspect that the parent/child relationship gets in the way of knowing each other as simply personalities. I think I see more of who my parents really were now that they are gone, both their strengths and their weaknesses and foibles. When we are young, the respect we have for our parents as authoritarian figures can get in the way of true appreciation.
You've written a lovely, heart warming piece.

A very touching post, thanks for sharing. And an excellent portait of the individuals and their relationship.

Hello Al. I'm sorry I'm way behind in my reading of your blog and so this comment is a tad behind the times. But I had to leave a comment. I have read and re-read this post many times. It seems you and I have shared similar times recently what with redundancy and loss. I wrote my dad a letter last year. http://www.e-clecticism.com/2009/09/letter-to-my-father.html

It really helped me to get my thoughts out into the open so to speak and I hope your missive has done the same for you.